In my life, I’ve done things that I’m not proud of. I think we all have those experiences. We look back on mistakes made that we would never tell anyone about and wait for the memory eraser from Sunshine of a Spotless Mind to become a reality. If we’re lucky we can only remember a small handful of those moments and try to push on with our life, constantly reminding ourselves that those momentary lapses in judgment, behavior and morality do not define who we are as a person. The other day, I had one of those life changing moments. A moment where you realize exactly what you’re doing at the time, but you’re too deep in your shame spiral to pull yourself out of the existential nosedive.

Let me give you a bit of background on me. First of all, I am addicted to creativity. I am amazed on a near daily basis on what the human spirit can achieve with a bit of ingenuity and elbow grease. There truly is no limit to what our minds can create. Secondly: my diet is absolutely terrible. I basically eat like that big pig monster from Mighty Morphin Power Rangers. The worse it is for me, the better it tastes. I am no stranger to the hurdle of “meat sweats” that can take you down in the middle of Plate 3 at bd’s Mongolian Grill. Five Guys is my mecca and I would gladly have them cater a close family member’s funeral. I basically have to work out several times a week so I don’t go full Brando in The Island of Dr. Moreau.

When these two aspects of my personality collide, nothing good can come of it. If I hear that a restaurant hired an escaped mental patient on a 2 week peyote binge to design their menu, I’m all in. The KFC Double Down that basically said “Fuck Bread” and had you eat your chicken cheese sandwich like a barbarian? I was there. The Grilled Cheese Hamburger from Friendly’s? Done and done. Did Papa John’s put Fritos on a pizza? You crazy bastards, you read my dream journal.

So with all of this making me into the man I am today, I suddenly found myself with a snack craving one night. It was ten o’clock and I realized that I wasn’t going to be able to sleep until I had something disgusting in my stomach. Being too busy lately to grocery shop for things like fruit and vitamins, I decided to take a drive down the road to my local 7-11. I was planning on getting a bag of chips, maybe some jerky. Nothing too adventurous, to be honest. But then I saw the sign for the Doritos Loaded Bites in the window, like a beautiful siren beckoning me into the rocks of a mid-life heart attack.

As I entered the 7-11, I tried to ignore the one remaining box of the Loaded Bites teasing me from the florescent display case. Either they make these things one box at a time as a public health initiative, or others before me had already decided to ruin their lives as well. I made my way to the chip aisle and saw a few interesting flavors. I shuffled myself to the clerk and splayed my wares on the counter. As I did, I could no longer resist the evil song of the nacho-cheesy temptation. I asked the clerk to get me a box of “those Dorito Things”, because to even speak its name was too much for my conscience to bear. The man next to him, a tall zombie in a red and black polo, dutifully reached into the display case and flopped the box unceremoniously next to my chips. The clerk asked if I wanted the Loaded Bites in the bag. I refused, afraid to contaminate the rest of my purchases with the mysterious Dorito dust escaping through the open box window. I spent just under $15 in snacks that night, which is more than anyone should spend on food in a store that also sells crack pipes.

The first thing I noticed on my drive home was the aroma of the Bites quickly overtaking me. This was not a long drive, less than five minutes. But the nauseating nacho cloud filled my car like someone had just pulled the ripcord of an emergency life raft. I arrived home just in time and brought my treasures up to my apartment. I grabbed a soda that I knew I would definitely need to fight this battle and set my treasures before me. 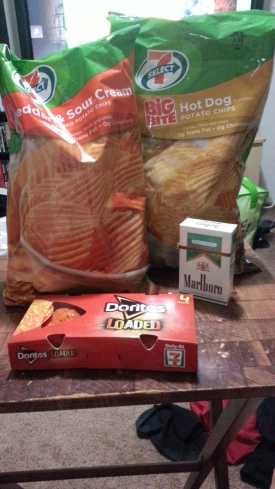 In the above picture you will find:

It should be noted that I also rented a copy of The Lego Movie from the Redbox at the 7-11. I had a good feeling that I was going to want to give up on this whole life thing sometime within the night, so this was my Batclaw to get me out of that pit. The theatrical side of me wanted to save the Loaded Bites for The Main Event. But the longer they sat there, the more I became concerned that the odor was starting to give me a mild stroke. So like Hulk Hogan at an 80’s house show, I decided to let the reliable favorites close the show so that the star could get on the road.

I ripped opened the box (because lids are for people with dignity) and stared at the contents. Inside were 4 Doritos Loaded Bites. Once I had them in my hand, I was a touch disappointed by how pedestrian they looked. They were basically triangle-shaped mozzarella sticks, but dunked into a nauseating mixture of Dorito dust and random spice leavins. In theory, this could possibly be not terrible. A few years ago Taco Bell added to their mad scientist lineage by introducing Dorito tacos. While they’re a bit much for my senses, a lot of people really dug them. However, Taco Bell is still technically a restaurant. 7-11 could only be called a restaurant by your learning disabled child who calls a house a cupcake and calls vodka “mommy sleepy time juice”.

I really have to say just how gross these things are upon further inspection. While they look like a fat, breaded Dorito, they feel and smell just terrible. The feel is gritty, like they were dropped on a sawmill floor. The Dorito “flavoring” was already transferring to my fingers, looking like I had just gotten to third base with a homeless Elmo. Dorito dust transfer is not a new experience for me, though the feeling of holding something warm during it somehow seemed much more disgusting. And the smell, same as before, basically promised permanent nausea for at least 3 days.

Finally, I bit into one.

The taste, surprisingly, was not completely unpleasant. It was warm, soft and had that addictingly spicy Doritos taste. The inside had some kind of cheese-like substance that really wanted to trick you into believing it was cheese. It wasn’t cheese, of course. But it was a solid B- effort. The consistency, though, was pretty gnarly. With your average mozzarella stick, there’s an internal barrier between the cheese and the casing. It logically separates the flavors to make them individual, but complimentary. Doritos Loaded Bites however believes that logic is for fags and mushes everything together in a warm, moist, cheese-ish heartburn. And in a disgusting way, it was almost decent.

Then, without warning, the after taste kicked into full gear. You may be aware of that Doritos aftertaste that can stay with you for hours after finishing a bag. If you’ve ever fallen asleep after eating Doritos (this is considered a Depression Merit Badge), that morning taste in your mouth is enough to make you want to scrub your tongue with a steel wire brush. But these came almost immediately after swallowing. I quickly ate the other three before my mind could scream “No!” and followed it down with a generous heaping of carbonated Coke to fizz-burn my mouth clean.

With the knowledge that everything I eat and drink for the next week and a half would taste like bad decisions, my next step was the Wildcard: the hot dog flavored chips. 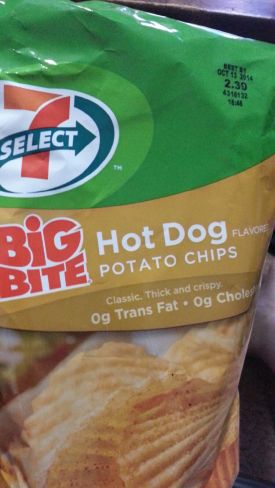 Finally vegans can enjoy the regret of a Big Bite.

In the past few years, chip makers seem to be drowning in a sea of their own hubris. 15 years ago, we had about 4 flavors and one of them was just “Original”. But out of nowhere Pringles decided to roll the dice with pizza flavored chips and came up with something both tasty and mind-bending. I don’t know what dark magic they tapped into, but somehow those chips actually tasted like pizza. After that, Lays decided to grab the ball and run like an escaped mental patient with flavors like Dill Pickle and Chicken and Waffles. Once they ran out of ideas, they decided to play the Fuck It card and held contests for us to pick a flavor. We got some fantastic entries from people funnier than me like Purple Drank and An Actual Frog. However, they chickened out went with choices that actually had flavors they could reproduce like Cappuccino and Wasabi Ginger.

Finally, it looks like 7-11 wants to get into the crazy flavor game. But how do you fit the flavor of a 7-11 Big Bite into a single potato chip, especially considering that you can’t add a heart-stopping amount of free cheese and relish to it once you get home? So I curiously took a bite. 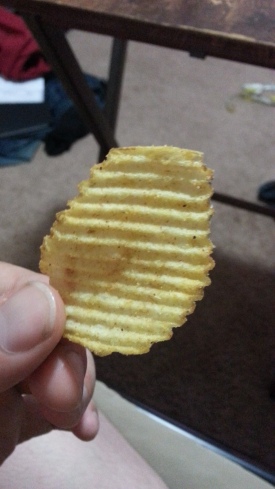 There’s no other flavor. There’s no Hot Dog, there’s no bun, there’s no odd-smelling boiled water. Just mustard. These evil sons of bitches sold me a mustard flavored potato chip. In fact, an entire bag of them. A human should only eat two mustard flavored potato chips in their life. The first raises the question of, “Did these mother fuckers just sell me a mustard chip?” The second answers that question with, “These mother fuckers just sold me a mustard chip.” Here I was, thinking that the worst thing that I was going to taste tonight was a spongy, lukewarm, spicy cheese triangle. Little did I know that 7-11 had plans to shit in my mouth not once, but twice on the same visit. As my body went into shock, I somehow managed to eat half a bag of the under-flavored Cheddar and Sour Cream chips and down the rest of my Coke. Nothing would make me forget the taste of a mustard chip, but I really wanted to try.

With that, I finally tapped out. I accepted my fate. Nothing good would come to me that night. I lit up a cigarette and pressed play on The Lego Movie. As the burning menthol vainly attempted to destroy any and all poisoned taste buds left on my tongue, I reflected on my choices of the night. For $15, I could have had a lovely meal. I’m surrounded by restaurants of any type of food I could possibly want. Perhaps some Five Guys. Or some tasty Chinese. Calzones are less than $9 and closer to me than 7-11. Why did I do this to myself? As I prepared myself for an abysmal despair spiral that could make Friedrich Nietzsche look like a Hallmark greeting card, my television tried desperately to remind me that “Everything is Awesome!”

Everything is not awesome, Lego Movie. No it is not.