The Scottish Detective Closes & New Videos and Resumes Are Posted!

Another closing, another show. Last night marked the closing night of the 2014 Hope Operas and specifically my show The Scottish Detective. A huge thanks to Amy Baska, Steve Custer, Devin Gaither, Bethanie Harmon, Eric Swartz and my entire cast for all of their dedication and hard work. The Hope Operas is always a fun time and I’m glad that I could be involved again this year with such a great cause.

Along with those closing statements, I’m happy to announce some new additions to the website! Firstly, I’ve added a couple of videos over at my Videos page. Included is a scene from a recent industrial film I shot with FJC Media and a documentary I shot and edited about my father’s 5 day hitchhike across the country back in 1979. You can see them both below, or at my Videos page here:

Along with new videos, I also have updated resumés for both my acting and directing. They can be viewed on my Resumé & Bio page here.

That’s about all for now. Tech week starts on Sunday for Molotov’s production of Nightfall with Edgar Allen Poe. Tickets are already selling impressively quickly, so make sure to reserve yours here. See you at the theater!

So Many Projects, So Little Time

Hello all. It’s been a little while since I’ve been able to post an update for the site. The irony is that it’s because of how incredibly busy I’ve been lately. First of all, God of Carnage rehearsals are in full swing. I have a fantastic cast that I’m working with that is 100% on the ball. Things are shaping up very nicely at the moment and I’m already excited to get this production in front of an audience. We open on September 19th, with a Pay What You Can preview on the 18th. Make sure to check out my Calendar to reserve your dates.

But before God of Carnage goes up, I’m happy to announce that I will be directing a staged reading that goes live this Labor Day. The play is called Cosmetic Consciousness and is written by my good friend Kristy Simmons. We will be performing it as part of the Page to Stage Festival at the Kennedy Center on September 1st from 3-5. Again, more details are at my Calendar.

But that’s not the only staged reading coming up. On September 28th I will be directing a staged reading for Molotov Theatre Group called Gallery. This is a pretty awesome play involving Batman’s Rogues Gallery during an Arkham breakout. The Joker, Two Face, The Riddler, The Scarecrow and Poison Ivy are all involved and verbally joust with each other while trying to solve the mystery as to who orchestrated the breakout. We’re going to be doing this up right in connection with Phantom Comics in DC, so make sure you don’t miss this one-night-only showing. Details are once again at my Calendar.

Finally, I’m happy to say that tonight is audition night for the Hope Operas. I will be directing a new play for 1Up Theatre called The Scottish Detective and we will be performing it all throughout the month of October. For pity’s sake, just check out my Calendar already.

Whole bunch of updates today. First of all, I’m happy to say that I finally have some new headshots! Make sure to check them out at my Pics page. For a sneak peek, enjoy my new main Headshot below:

Along with my headshots, I also added some pictures from my night with the DC Shorts Screenplay Festival from last year. Make sure to check them out as well!

One more bit of news: I happy to say we have an audition date for the Hope Operas! We will be auditioning on Monday August 25th at the Comedy Spot in Arlington, VA from 7-10, with holding possible callbacks on the 26th. Actors are expected to bring a 1 minute monologue and be ready to read sides from the available plays. Please email HopeOperas@gmail.com to request a slot. Also, make sure to check out my Calendar and the Hope Operas Page for more information.

That’s all the news that’s fit to print for now. More updates coming soon, so keep your eyes peeled!

The clock is ticking. Only 2 more days until we re-release Saving Private Poo to the world. We’ve all been working our nailed-on tails off, and we’re chomping at the bit to get this in front of an audience. Our official opening is Saturday at 12:30 at the Fort Fringe Redrum. We’ve already had some very strong pre-sell numbers, so you might want to reserve your tickets here to make sure you don’t miss out on this awesome event. And if you do come, make sure to join in the chat on Twitter and Facebook with the hashtags #SavePoo and #CapFringe14. 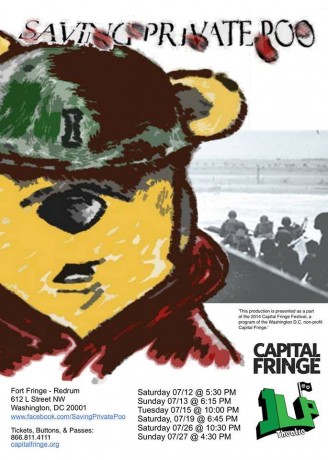 Next bit of news, the press release for God of Carnage is up and running. We’ve posted it all across the net and I’ve already had some great responses. To read it yourself, check it out here. Hope to see you there!

Finally, I have a bit of early news. As soon as God of Carnage closes, I’m happy to announce that I’ll be jumping right back into the director role for my third involvement with The Hope Operas! For those of you who aren’t aware, The Hope Operas is a yearly theater festival consisting of weekly installments of a handful of different plays. Each play is associated with a different charity, and whichever play wins the weekly audience voting, that play gets the most money for their respective charity. It’s an awesome way for the theater community to give back to those who need it, and it’s also an awesome way to try out some things that you can’t at a different setting. Nearly three years ago, we first mounted R.U.X. at Hope Operas. We had such a fantastic run, we parlayed that into a Fringe mount and ended up winning Best Comedy that year. So awesome things can happen with The Hope Operas, and I owe them a tremendous debt of gratitude.

With that, I’m glad to be back with them again. This time I will be directing a new play written by my Saving Private Poo compatriots Steve Custer and Devin Gaither. Details are still forthcoming, so make sure to keep yourself posted on this site for more info. Until then, feel free to check out The Hope Opera’s website for more details on the festival.

That’s all the news for now. I hope to see everyone at Fringe for Saving Private Poo or, at the very least, stumbling around the tent in an alcohol and heat-stroke induced stupor. See you there!

Hello friends. Lately I’ve been slacking on this site for a bit. Things have been insanely busy but with so much new happenings, I figured it was time I let you all in on my life. First of all, many thanks to Jackie Walter, David Dieudonne and all of Silver Spring Stage for a fantastic run of The Navigator in their Annual One Act Festival. We put together an amazing show and Jackie and I even walked away with Acting Awards for our efforts. I always feel that if I’m not tired after a performance, I haven’t given it my all. And this show, even though it’s only 30 minutes long, left me exhausted every night.

Secondly, I’m proud to say I recently was invited to be a part of the Emmy-Award winning show Veep. Alright, fine, it’s only featured background. But I saw some of the playback and I’m fairly certain you’ll be seeing my handsome face alongside Julia Louis-Dreyfus for my television debut. Keep an eye out for me in the upcoming Season 3!

So what’s next? How about a triumphant return to The Hope Operas in a brand new Maurice Martin show called Chupy and the Science Twins? Premiering October 7th at the Comedy Spot in Ballston, I’ll be returning with Amy Kellet, John Tweel and director Sun King Davis of R.U.X. fame among other talented people to bring you a twisted take of Saturday morning cartoon mystery shows. Can we have another clean sweep like our robot love did 2 years ago? Come by to find out and support some great charities. Visit The New Hope Operas Website for more details.

And finally, I’ve added a bunch of new stuff on my site. I have an updated Resumé and Bio here, added pictures from The Navigator here, a new article from The Sentinel where I’m quoted on my Press page here, some new links to some favorite people here and finally my Theater Calendar with the dates, times and locations for the upcoming Chupy and the Science Twins here.

Hope to see you all in Ballston!