The Margins In 2015 & New Pictures From Nightfall and Saving Private Poo!

Hello friends. Another year has ended and I couldn’t have possibly been busier. Throughout 2014 I performed in 5 plays (Morning, Miranda, The Narrow Gate, Saving Private Poo, Nightfall and A Klingon Christmas Carol) and directed 4 more (God of Carnage, The Scottish Detective, Cosmetic Consciousness and Gallery). I got to do some more background work for Veep, filmed some industrials with FJC Media, shot a short film and joined Molotov Theatre Group as their Special Events Coordinator and a company member. All in all, it’s been an excitingly exhausting year and I’m proud of everything and everyone I’ve gotten to work with. However, as the year closes, we look forward to 2015 with a brand new project. The Margins will be debuting with Molotov in April. The story centers around a group of psychics who are brought together to create a spirit, similar to the famous Phillip Experiment in the 1970s. However, once they bring their powers together, they discover that their creation is stronger than even they can imagine. It’s a creepy script, likely made all the creepier by us at Molotov. Expect some splatter with this one, kids. For more information, check out Molotov’s page here.

I also have a bit of a site update, as I was finally able to add pictures from both Nightfall and Saving Private Poo. Both sets came out pretty awesomely and you can check them out on my Pictures page here. Here’s just a little sample: 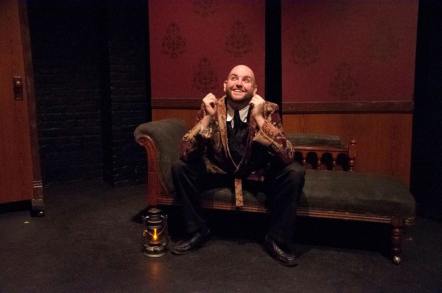 Why yes, I am insane. Thank you so much for asking.

That’s about all for now, my dear readers. In the meantime, make sure to mark your calendars for The Margins, and hopefully I’ll see you there. 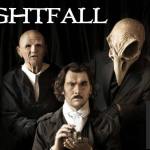 Great news for us Molotov Theatre Group people: Nightfall with Edgar Allen Poe has been Helen Hayes recommended! That’s pretty awesome news. Almost as awesome as all of the great press and audience feedback we’ve received. Here’s a snippet of our review from DC Theater Metro Arts:

Well, I can certainly play a convincing psychopath. Feel free to read the rest of the review here or check out all of my mentions on my Press page. If you’re planning on joining us for our next two weekends, make sure to get your tickets soon. Every show we’ve had so far has either been sold out or damn near close. Reserve your tickets at Molotov’s website here.

Finally, I’m happy to announce that I got the chance again yesterday to shoot with HBO’s Veep. I always have a great time whenever I get the chance to shoot for that show and yesterday was no different. There’s some big surprises that I can’t talk about in Season 4 that I can’t wait for people to see. I’ll make sure to be keeping everyone updated on when you can spot me behind some big names coming up soon. Until then, see you at Nightfall!

My Appearance On Veep! 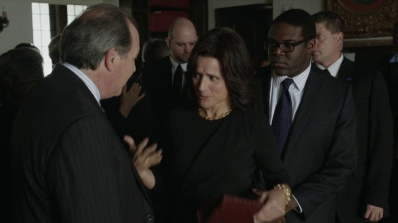 Why yes, that is me appearing on Veep last night. As you can tell, Julia and I are best friends and occasional lovers. Or, at least, we occupied the same space for a few hours. Hoping to make more of these arbitrary television appearances soon, so keep your eyes peeled. In the meantime, check out more pictures from my appearance at my Pictures page.

More Reviews Come In For Morning, Miranda & A Veep Note!

Another week, another handful of performances for Morning, Miranda. Big thanks for everyone who came out this weekend to see us. The crowds so far have been very energetic and we’ve been getting some fantastic feedback. Part of that feedback has come by way of some great new press clippings, both of which I’m featured in. The first is in MD Theatre Guide, where I get a mention in the review. The second is from The Sentinel, in which I was interviewed on my thoughts on the show. Also, MD Theatre Guide listed us in their Top 5 Shows To Seek The Week! You can check them out, along with DC Metro Theater Arts’s review, at my Press page here. We only have 2 more weeks of shows. So if you haven’t gotten your tickets yet, now’s the time to do it. Make sure to reserve them here or on my Calendar page.

And just a quick note about my upcoming Veep appearance. HBO has released small synopses of the upcoming episodes, but I’m not exactly sure still when I will be appearing. It sounds likely that it may be this Sunday, but that’s only an educated guess. As soon as I know more, I’ll be sure to let you guys know. So let’s cross some fingers.

Hello all. We are only eight days away from the opening of my latest project, Morning, Miranda! And to celebrate, I’m happy to present our first press notice from BroadwayWorld.com. Click here for the kind words about a show I am very proud of. I’m sure it will be the first of many, and I’ll make sure to include any and all press write ups on the site as soon as they come out. In the meantime, make sure to get your tickets here. We only have 4 weekends of shows and a whole lot of buzz going, so don’t dilly dally with getting your tickets. At the very least, hop over to my calendar here and add the dates to your own Google Calendar with the click of a button! And make sure to join in the Twitter conversation with the hashtag #MMIRANDA. We’ve been posting a lot of rehearsal pictures and the like, and we hope you use it yourself when you come and see us.

And finally, we have another teaser trailer for Season 3 of Veep which premieres April 6, 2014. Still not sure when my episode will be airing exactly, but as soon as I know, so will you happy people. But in the meantime, enjoy the teaser!

Since I decided to launch this little corner of the web for myself a few years ago, I’m happy to say I’ve finally hit a first milestone. Today I have passed over 1000 views! While I’m not sure why I’ve gotten hits from Bahrain, Peru and the Russian Federation, why ask why? Welcome, my international brothers and sisters! In order to celebrate, I’m happy to say that I’ve finally added pictures from last Fall’s production of Chupy & The Science Twins, which you can view here. So if you’ve ever fantasized about what I would look like in a mummy costume, your dreams have finally come true.

In the meantime, rehearsals are up and running for Doorway Arts Ensemble’s production of Morning, Miranda. Make sure to mark your calendars with the dates and times here, and make sure to follow me on Twitter here with rehearsal updates and what-nots.

And finally, HBO just gave us a video teaser on the 3rd season on Veep. I actually started watching the series last week, and I’m proud to say that it’s a pretty funny and witty show. It’s nice to know that I’m looking forward to the the 3rd season premiere for a reason other than seeing my handsome face. Still no luck on an upcoming episode synopsis, but here’s a little something to keep us happy for another 52 days.

Just wanted to pop in and let everyone know a few bits of information. First of all, I’ve made a few website tweaks. I’ve gussied up the Important Links page with some graphics, which can be viewed here. Consider it a love letter to all of the companies I’ve worked with. Also I have a new Resumé which can be viewed here, in glorious black and white PDF form for your viewing pleasure.

And finally, just one quick note: HBO has given the premiere date for Veep‘s 3rd season. It starts on April 6th, 2014. That’s a little over 2 months until you get to see me stumbling around behind Julia Louis-Dreyfus. I’m not sure if I’ll be in the first episode or not, I’ll know once they release a plot summary for the impending episodes. But as soon as they do, I’ll make sure to post the date and time right here. So check back here soon for the date and time of my HBO “debut”.

Hello friends. Lately I’ve been slacking on this site for a bit. Things have been insanely busy but with so much new happenings, I figured it was time I let you all in on my life. First of all, many thanks to Jackie Walter, David Dieudonne and all of Silver Spring Stage for a fantastic run of The Navigator in their Annual One Act Festival. We put together an amazing show and Jackie and I even walked away with Acting Awards for our efforts. I always feel that if I’m not tired after a performance, I haven’t given it my all. And this show, even though it’s only 30 minutes long, left me exhausted every night.

Secondly, I’m proud to say I recently was invited to be a part of the Emmy-Award winning show Veep. Alright, fine, it’s only featured background. But I saw some of the playback and I’m fairly certain you’ll be seeing my handsome face alongside Julia Louis-Dreyfus for my television debut. Keep an eye out for me in the upcoming Season 3!

So what’s next? How about a triumphant return to The Hope Operas in a brand new Maurice Martin show called Chupy and the Science Twins? Premiering October 7th at the Comedy Spot in Ballston, I’ll be returning with Amy Kellet, John Tweel and director Sun King Davis of R.U.X. fame among other talented people to bring you a twisted take of Saturday morning cartoon mystery shows. Can we have another clean sweep like our robot love did 2 years ago? Come by to find out and support some great charities. Visit The New Hope Operas Website for more details.

And finally, I’ve added a bunch of new stuff on my site. I have an updated Resumé and Bio here, added pictures from The Navigator here, a new article from The Sentinel where I’m quoted on my Press page here, some new links to some favorite people here and finally my Theater Calendar with the dates, times and locations for the upcoming Chupy and the Science Twins here.

Hope to see you all in Ballston!