A New Blog Post For Riding The Washington Metro!

Two blog posts in a matter of weeks? What can I say, I have time. Today’s post is about a subject that’s near and dear to anyone’s heart who lives around the DC Metro area. No, not the State of the Union or why or Chinatown is only one block. I’m talking about our fine Metro system! I realize outsiders traveling to our fair city are likely puzzled by our unique system, so I thought I would help everyone out with a Beginner’s Guide. If you need to know how to tackle that escalator or curious as to why your cell phone doesn’t work in the tunnel, please check it out here! Feel free to send some feedback, share it around, etc. I write these for you. And my boredom. But mainly for my boredom.

While you’re at it, make sure to check out my other blog posts dedicated to the underlying depression found in terrible snack foods, why men fear feminists and the quality of Hulk Hogan cartoons. I promise you, I’m quite clever.

Also as a sidebar, I took the time to reformat each of these blog posts to make them easier to read. You’re nice enough to read this drivel, you don’t deserve eye strain on top of it. Right?

A New Blog Post About My Discovery Of Doritos Loaded! 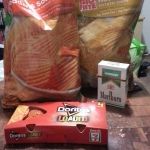 After more than 6 months of silence, I’m happy to say that I was finally able to get the time to write a new blog post. This is much lighter than my last one about #YesAllWomen (though considering how the world has been shaping for the past few months, don’t be shocked if another semi-serious one comes around). This isn’t about violence or sexism or racism. No, this jolly post is about despair. Specifically, it’s about the existential despair found in terrible snack foods.

The Dali Lama once said “Happiness is not something ready made. It comes from your own actions.” This is further proof that the Dali Lama has never eaten food from a 7-11. To read about my soul’s wrestling match with insulting snack flavors, click here!

Feel free to read, comment, share, what have you. And please, do enjoy my misery. If enough people enjoy it, maybe I’ll write about something else I put in my mouth. Also, if you haven’t before, make sure to read my posts about why men are so defensive about misogyny and a terrible wrestling cartoon from the 80’s. I promise you, they’re quite good.

First of all, thank you all so much for the fantastic response I received for my latest blog post. The first few days that it went live, it absolutely blew up. And in the two and a half years I’ve had this website, that single post has been responsible for over 15% of all site traffic. That is amazing and special thanks to anyone who shared it across the web. In case you did miss it, however, it’s still live and going strong. Make sure to give it a read here and join in the discussion. This week I will be going back to the goofy side of life and doing a new Saturday Morning Sludge, but I’m sure there will be another social issue that pisses me off sooner than later.

Next, onto business with a quick site update. I just received some promo pictures for Morning, Miranda and have added them to my picture gallery here. Since the number of pictures was small, I also added a close up shot I used for promotion on Facebook. Enjoy the nightmares.

Just a quick notice that rehearsals for Saving Private Poo start beginning next week! This play is just weird enough to be a huge hit at the Fringe, and I look forward to playing a war time Eeyore. Make sure to follow both me and the show on Twitter to get all of the awesome rehearsal updates, promo codes, etc.

And finally, tickets for The Source Festival have officially gone on sale! The piece I am involved with is called The Narrow Gate and opens this Friday. I am very proud of it and hopefully you get the chance to come out and see it. I’m starring opposite Valeka J. Holt and we’re directed by Angela Pirko, and rarely have I completely gelled with an actor and a director from Day 1 as I have with these ladies. You can buy the tickets here and mark your calendars with the dates and times here.

See you in the Exoverse.

Misogyny, #YesAllWomen and Why Men Are So Defensive About It

So along with talking about silly things on my new blog, I want to use it as a forum to occasionally express my opinion about some serious topics. And after the USCB shooting last weekend, there has been a lot of talk about misogyny in our culture. I don’t know if my opinion is original or even valid, but where else am I going to bitch about it? If you care to read my take on it, please read my latest post over on The Peanut Gallery here and feel free to sound off in the comments section.

If this is too heavy for you, I promise a new Saturday Morning Sludge next week.