Hello all. As we rehearse our new version of Puffs with Wolf Pack Theatre Company, I’m happy to announce we have our tickets on sale! We open on February 27th and run for 3 weekends. If you want to come see us and give us all a big Puff Hug, you can get your tickets here. I’ll be posting more goodness as our opening draws near, but I wanted to at least share the link with everyone.

The Return of Puffs – Third or Nothing!

Hello friends! I’m super excited to announce that I will be returning as Wayne Hopkins in a new production of Puffs with Wolf Pack Theatre Company! I had the honor to play Wayne in the Washington DC debut of Puffs earlier this year and he’s one of my favorite characters I’ve had the privilege to inhabit. Make sure to keep posted to the site for performance dates and ticket information.

Opening Night for A Christmas Carol!

Hello all. Just wanted to celebrate tonight’s opening for A Christmas Carol with Wolf Pack Theatre with a production still sneak peak!

Do I sound as good as I look? You’ll have to come out for yourself to find out! Tickets are on sale at the door or here for only $10. Call it our Christmas gift to you. Hope to see you there!

Hi friends. I’m happy to announce I’ll be celebrating the holiday season this year with a new show! I’ll be joining Wolf Pack Theatre Company for the first time playing Young Scrooge in their production of A Christmas Carol! The show is perfect for all ages and audiences and will hopefully bring you a bit of Christmas cheer. We open on December 13th and run for two weekends with double shows on Saturday. Tickets can be purchased here. Hope to see you all there, and Happy Holidays to all!

Pictures and Review for Silver Spring Stage One Act Festival 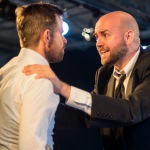 Hello friends. First of all, I want to give a huge thanks to everyone who made it out to Silver Spring for our One Act Festival last weekend. We had a fantastic turn out and some very energetic crowds. Always proud and happy to perform for my friends and family. To close out the great weekend, I’m happy to share some pictures and a review from the show. First of all, here’s a few pictures that were taken by the talented Harvey Levine:

You can check out the rest of the pictures from Six Seven Three Twenty and Alternate Theory, along with pictures from all of my other shows, here on my Photos page.

I’m also proud to share a nice write-up we got from DC Metro Theater Arts for our weekend. Here’s an excerpt:

“Adam Adkins plays Mike O’Sullivan, the assistant to it seems everyone and is probably the most likable character. Adkins hits the mark by straddling the fence between Gary and Doug and the Coach.”

Not a bad little nod. Feel free to read the full review here or view the rest of my press clippings here on my site. Also, the One Act Festival continues for the next two weekends. Not with me, sadly, but with many of my friends and fellow craftspeople. Please make sure to show your love and support by planning your trip to the festival here.

So that’s all for now, my dear friends. But make sure to come back and visit soon, as art never stops coming.

Tonight is the night: The opening of my two one act plays for the Silver Spring Stage One Act Festival. For tonight’s premiere, we’re offering a Pay What You Can performance. So come on by at 8 with whatever cash you have in your pockets and see my glorious return to the stage. In Six Seven Three Twenty, we go into the draft room of a struggling football team who are in the middle of an internal power struggle. Then, in Alternate Theory, we present a new darkly hilarious theory on the assassination of JFK. Both of these shows are a lot of fun and I’m excited to get them in front of an audience. For ticket details on the remaining weekend, please click here.

Hope to see you all there!

Hey gang. Just wanted to drop by and let you know about a new piece of press that my friend and journalist Peter Rouleau wrote for the upcoming Silver Spring Stage One Act Festival for the Sentinel. Here’s a snippet of my interview portion:

“‘After taking a break from acting for a few years, the Silver Spring One Act festival is a great reminder as to why I love this art so much,’ said local actor Adam R. Adkins, who appeared in the 2013 one-act festival. He has performed in and directed other productions for the company. ‘They’re a great group of people to work with and bringing new, original works to life is incredibly rewarding,’ Adkins said.”

If you’re interested in reading the full clip, please follow this link. And you can see the rest of my press clipping by going to my Press page.

In addition to the lovely write up, you can now purchase tickets for the festival by following this link. The tickets are available for Friday, Saturday and Sunday, but we also have a pay-what-you-can on Thursday night. We also have a Facebook event page here if that tickles your fancy.

Hope to see everyone there!

Hello Friends. It’s been a minute since I’ve updated my site here. In fact, it’s been over two years. How many minutes is that exactly? 60x24x…I don’t know, I already lost interest. But it’s been quite a while, anyway.

Theater has been my passion for over a decade. However, no matter how much you love something, you sometimes need a break. After doing 10 projects within a year (including directing 3 of them), I officially suffered burn out. For the first time in a long time, I needed to put a little distance between myself and performing. Within that time I did occasional staged readings and smaller projects, but mostly my time was filled with nights to myself and hiking on the weekends.

However, I’m happy to say that I’m officially back in business.

To celebrate my return, I’ve made some long-needed updates to my website. I’ve entirely redone my Pictures and added new ones from more recent shows, including new headshots. I also updated my Videos page with a lot of new content from various projects with Molotov Theatre Group and some promotional voice overs I recorded for the company Feith. The Bios and Resumés have also been brought up to date with the occasional projects I was involved in within the past few years. And as you can see from above, I finally updated my website banner image to something more current. The hair and goatee has been transformed to a beard and a freshly shaved head.

Along with the site updates, I’m proud to announce the projects that have brought me back to performing. Firstly, this Saturday at 7:30 is the screening for the 48 Hour Film Festival. I was fortunate enough to work with Shrug Productions on a short called Welcome Home, which will be premiering at the festival. In it I play an assassin who moves into his new apartment, only to be haunted by the ghosts of his past. Tickets can be purchased here for the one-night-only showing.

After that, I’ll be back on the stage as part of Silver Spring Stage’s One Act Festival. I was fortunate enough to work on this project a few years ago with Brian M. Doyle’s The Navigator, which netted me an acting award from the festival. This time I’m doing two shows in the same night. I’ll be doing another Brian M. Doyle play called Alternate Theory, which takes a different view of the JFK Assassination. On the same night, I will also be performing in Jacy D’Aituolo’s play Six Seven Three Twenty which takes a behind-the-scenes look at a struggling football team on draft day. Both plays are a lot of fun and I’m excited to get them in front of an audience. As soon as tickets come available, I’ll make sure to post the link. You can find more information, as well as time and dates, on my Calendar page.

So that’s all for now. It’s great to be back doing what I love and keeping you all informed on this site. Hopefully I’ll have more fun stuff to update this site with soon, so make sure to check back when you can.

Until then, see you from the stage.